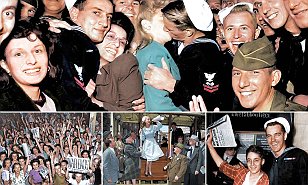 VJ Day 1945. THE ESTATIC faces of people celebrating VJ Day have been brought back to life after being expertly colourised to commemorate the 73rd anniversary of the victory. Vivid colour images show a delighted woman using paper as a makeshift megaphone to announce the victory to people on the street, two women holding a newspaper from the day war started and the announcement of peace and sailors and DC residents dancing the conga in front of the White House. Other stunning shots show US soldier holding Japanese flags in celebration, raising the American flag in Okinawa and the iconic photo of a sailor kissing a woman in Times Square, New York. Additional images from WW2 itself have been shown, including the 1941 Pearle Harbor attack by Japan on the US Fleet, and the Nagasaki nuclear bomb by the US against Japan in 1945, which led to the surrender by Japan and effectively brought WW2 to a close. The original black and white photographs were painstakingly colourised by electrician Royston Leonard (53) from Cardiff, Wales. Royston Leonard / mediadrumimages.com

This website uses cookies to improve your experience while you navigate through the website. Out of these, the cookies that are categorized as necessary are stored on your browser as they are essential for the working of basic functionalities of the website. We also use third-party cookies that help us analyze and understand how you use this website. These cookies will be stored in your browser only with your consent. You also have the option to opt-out of these cookies. But opting out of some of these cookies may affect your browsing experience.
Necessary Always Enabled
Necessary cookies are absolutely essential for the website to function properly. This category only includes cookies that ensures basic functionalities and security features of the website. These cookies do not store any personal information.
Non-necessary
Any cookies that may not be particularly necessary for the website to function and is used specifically to collect user personal data via analytics, ads, other embedded contents are termed as non-necessary cookies. It is mandatory to procure user consent prior to running these cookies on your website.
SAVE & ACCEPT